ALLISON TOOK ONE look at the house and shuddered. Randy had insisted on seeing this monstrosity, despite its isolated location and state of disrepair.

“This is a beauty,” the real estate agent was saying, “built in 1885 by John Talbot for his bride Sophie… oh, it says here that she died on site… apparently, so did he… suicide… ” her voice trailed off. “But that was a long time ago, right?” She giggled nervously. “These old houses can have character, right?”

Allison tried to nod. Retirement came young for dot com folks, and ever since he had sold his shares to Microsoft Randy had been desperately looking to reinvent himself. First, it was a restaurant, then a craft brewery; now, he wanted to flip houses.

Sure, it would have been fun if they hired a crew and stayed in Seattle. But Randy wasn’t that way. He wanted to do it himself. After a stint apprenticing with some wood workers in upstate Oregon, he felt he was ready to put his newly acquired skills to good use. “We’ll buy one of these old neglected beauties, fix it up, and move on to the next!” He pointed at his laptop. “Look at this! A Queen Anne in upstate Michigan for $80,000!”

Allison tried to be on board. Randy had a good sense of things. Maybe flipping houses would work out in the end.

But did it have to be this house? Huge, neglected, and empty for years, the Talbot House had a reputation. Allison wasn’t sure about the stories of ghosts and ritual murders, but she did think that it had been abandoned too long to be redeemed. Randy might have seen an investment opportunity, but all she saw was an old white elephant of a house, some 19th century robber baron’s Gilded Age nightmare.

Not to mention the deaths. A lot of people died in that house. Allison fought another shudder. Even if they did fix it up, who would take it off their hands? Not this one. Please God. Not this one. “I don’t know,” she hedged. “It’s awfully out of the way.”

“But that’s its charm!” He took off towards the front door. “Come on, baby. I think this could be the one.”

Allison forced a smile. Randy was like a little kid when he was excited. “We can look at it, I suppose, but there are others – -”

“No way… is that a pool?” Randy veered off towards the back yard. The real estate agent smiled sheepishly and followed. She was smart; she knew that Randy held the purse strings.

Allison sighed and pushed back her hair. Might as well check it out. Randy could not be stopped when he saw something he wanted.

“Don’t go in the basement.”

Allison whirled around; behind her stood a girl in an old-fashioned white dress. “Holy crap! You scared the shit out of me!”

“It’s always dark in the basement,” the girl murmured.

The girl was thin to the point of emaciated and dark smudges ringed her eyes. Her complexion and general overall disposition made her seem malnourished, but it was her dress – or rather, what was on her dress – that caught Allison’s eye. Something dark and shiny stained the front. Allison looked harder. Was that blood? Allison took a step back. “Honey, are you okay? Did something happen…”

“Allie?” Randy yelled. “Are you coming?”

Allison glanced over her shoulder. Randy and the real estate agent were standing on the porch, waving for her to come. She turned back to the girl.

There was no girl. 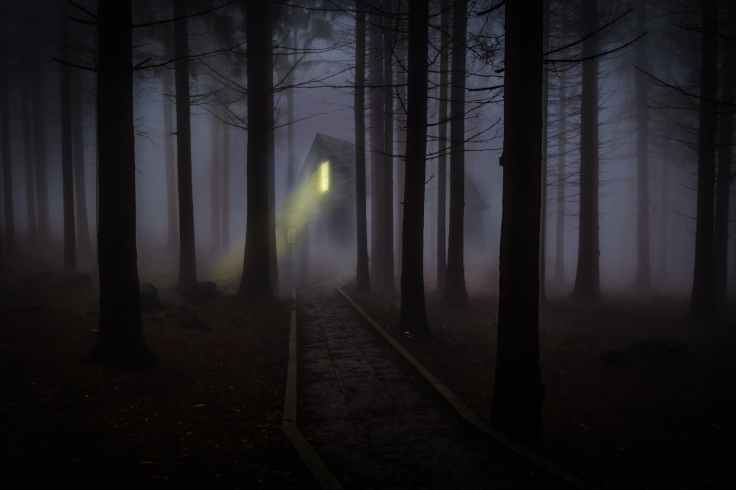