I’M GOING THROUGH a phase.

I have a need to write ghost stories.  I have no idea why. At heart, I’m a romantic suspense writer. I like a good HEA. (That’s happily ever after for non-romance writers).

The thing is, I don’t particularly like ghost stories. Why? Lots of reasons. I have a tendency to scare myself, so there’s that. Plus, there’s this tendency towards gore in the horror genre that turns my stomach. I have a hard time ripping plants out of the ground, for God’s sake. Blood for the sake of blood is ridiculous, and seeing or reading about people being tortured gives me serious pain chills. Like, serious pain chills.

Then there’s the fact that I’m not sure how any ghost story I could write would be any different from anything that’s already written. When you break it down, ghost stories all follow a similar pattern: There’s a protagonist. S/he stumbles across an object, moves into an old house, drives down a wrong road, or does something otherwise stupid, and runs across somebody who’s pissed off about being dead. The protagonist freaks, the dead person’s all I’m going to make you go crazy and/or kill you, and our protagonist either gets away or dies. The End.

Okay, okay, I’m busted. As much as I don’t like ghost / horror stories, I still watch them. Sometimes. After they’ve been out and I can fast forward through the gore. For instance, I watched seasons 1, 3, parts of 5, and parts of 6 of American Horror Story.

I say “parts” because I always read the spoilers first to determine whether or not I can handle the gore. Six really disappointed me because it was so-ooo gory, but other than that, I loved everything about it. The meshing of the reality series versus actual experience. A fictionalized American legend. Kathy Bates. But I especially loved the house. The hardwood floors in the season six house were amazing. I swear, I watched that show for the hardwood floors.

Currently, there’s this show on Syfy called Channel Zero: Butcher’s Block. It looks so intriguing, but all the blood and gore make it a hard pass, which sucks because I love me some Rutger Hauer. I did look it up, though, and found out that the series Butcher’s Block was partially inspired by a Subreddit called Search And Rescue (SAV). 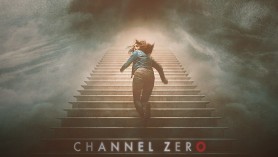 Anyhoo, I binge read the entire series and scared myself stupid. If you like scary stories, these are the real deal. The worst part is that they deal with weird stuff in the woods, and I love the woods! I really, really, love the woods. Messing with my love of solitude and nature ain’t right, man. It ain’t right.

Now I know how my parents felt about the ocean after seeing Jaws.

Sorry for stringing you all on a tangent, since I’m obviously living in 2015, but getting back to the point, I’m all into ghost stories right now. I could fight it, but fighting the muse never works. I’ve got to push through it, and hopefully, once I get past it, I can get back to more traditional happily ever afters and do away with the thank God we’re still alive endings.

BTW, if I run across a stairway in the woods, I’m taking an ax to it.