In honor of the release of A Dead Man Walking, I present a short story based up on the character Steve, created by The Ceaseless Reader Writes.

STEVE SAT ON the subway, his mind on his boss’s ridiculous obsession with coffee.

The image of an infuriated Darla Nyte, glaring at him and shaking an empty coffee pot, would not leave his head. “Honestly, Steve, all you do is put in a filter, pour the coffee on top of it… but not too much, only a tablespoon per cup… and then pour in the water. Boom! You turn it on. Boom! There’s coffee. See? How hard is it, Steve? How. Hard. Is. It?”

Steve flinched at the memory. Darla was intimidating when she was happy, but when she was riled, forget about it. He pulled out his phone and got on Amazon. One Keurig, delivered directly to the office… he pressed send. It’d be there tomorrow morning. There. Done. No more coffee angst.

So what if his husband gave him shit about spending his own money at the office? Sometimes it’s about peace of mind.

Gary texted back. Hay is for horses.

Good. Look what I’m doing. Gary sent him a picture of the dinner he was making. Fettuccine Alfredo, a fresh tossed salad, and tiramisu.

Such a gourmet. Just looking at the picture made Steve’s stomach growl. You’ve been Pinteresting.

I have. Found a recipe. Come home. I want to test it on you.

I love you more.

Steve slipped his phone back into his jacket. How’d I get so lucky? Gary was hot, he cooked, he was a terror in the sack… Steve looked at the subway ceiling. I don’t know what I did right, but thank you.

The train rolled into the station. People got on. People got off. An old woman sat down next to him, pulling him out of his reverie. The subway seats didn’t accommodate the girth that was the new American bottom. Should he stand up? Was he being rude?

“You work for the Nyte Detective Agency, don’t you?” The woman spoke with a light Eastern European accent. “I think you do. I think you know Nyte.”

Steve frowned. Was she a client? He took in her dyed red hair with its grey roots, the caked on makeup, heavy eye liner, too red lips. Good Lord. She looked like a 1990s drag queen. Steve felt an urge to pull her off the train and take her to the nearest Mac store. “I do,” he replied. “Have we met – ”

Scorn crossed her face. “No. We have not met. I have something for Nyte. Make sure she gets it.” She placed a Whole Foods reusable shopping bag in his lap. “Whatever you do, don’t rub it. Not that you will listen. They never listen. Nobody ever listens.”

The woman sneered at him in some unknown Slavic language and jumped off the train the moment its doors opened.

Despite his irritation, Steve was impressed. Nimble old thing, he mused, then looked down at the bag. To open or not to open? What if it’s anthrax? Could be anthrax. He opened the bag. Don’t be anthrax, don’t be anthrax.

It wasn’t anthrax. It was an bronze oil lamp. Like the one in Aladdin. It looked old. Maybe he could sell it on Ruby Lane. Too bad it was so grungy. Steve pulled down his sleeve and rubbed it.

The lights flickered, like a strobe in a 1980s theme party. The car filled with smoke. Somewhere a woman screamed. The train came to an abrupt stop.

The lights blinked back on. The train was now completely empty, except for the large and extremely muscular bald man standing in front of him. “Duuude… thanks for that. I’ve been stuck in there for like… ” The man’s face contorted as he passed a long and loud fart. “Whoa… sorry, dude. That’s a stinker.”

The fart wrapped itself around Steve’s neck like a noose and started choking him. Steve waved his hand in front of his face, his eyes tearing. “Oh… my… Gawd… ”

Surprise pulled him out of his asphyxiation. Steve stopped waving and stared. “You mean, you’re a genie?”

The man shrugged. “Sure. You can call me that… it’s kind of retro. And feminine. But it’s cool.” He leaned to the left and lifted his leg.

Another fart, this one stronger and… and was that a green cloud? Steve gagged and passed out. 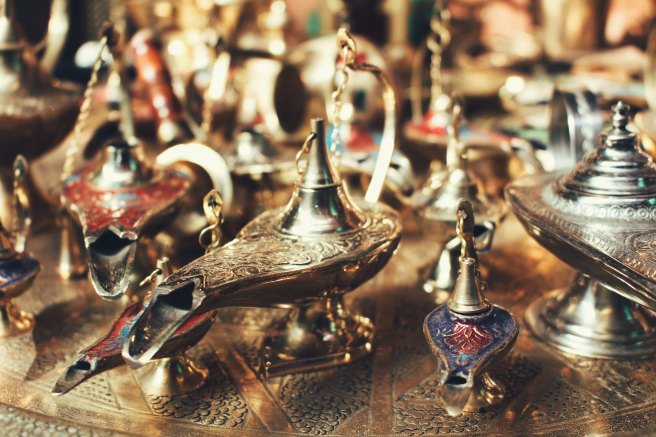 Part 8 by The Britchy One, https://bitchininthekitchen.org/

Liz Charnes sits at her desk, hard at work trying to figure out HTML. Follow her if you like stories about ghosts, gangsters, and broke trust fund girls.