Tell Me A Story, Part 2… a Suggestion.

Yesterday’s post on the new CBS on Demand show Tell Me a Story might have been a tad bit salty.  It’s just that I’m a fairy tale aficionado. I love me some fairy tales.

Here’s my problem with Tell Me a Story. Despite its fairy tale hype, it’s not actually a fairy tale. I feel misled by the advertising, hype, and even opening credits.

You see, fairy tales have unambiguous elements that clearly identify the genre. Much in the same way that romances must have a happily ever after ending, or detective stories must have elements of surprise, fairy tales also must contain certain elements to be considered a fairy tale. These include:

Snow White and the evil Queen. Cinderella and her stepmother. The wolf who blows down the pigs’ houses and eats them. You know. An all caps VILLAIN.

Personally, I think this is Tell Me a Story‘s biggest flaw. Sure, it’s all epic and subversive to make the three little pigs criminals, or Hansel and Gretel a suicidal and drug addicted club kid and a war veteran with PTSD and serious attachment issues, but without adding a 180-degree polar opposite villain (such as a mob boss nicknamed The Wolf who is known for devouring (literally or figuratively) anyone who tramples on his turf, or a treatment center run by a woman who offers free food and rehab but instead cuts up her patients and sells their body parts) there is no fairy tale. It’s just another urban soap opera.

[Nota bene here. This show is unusually political. There’s at least two conversations about the awfulness of the current administration; in fact, one conversation goes so far to say that we’re living in the apocalypse. (Which is so-ooo over the top, BTW, since it’s said by the 1% blonde woman living in that awesome apartment I talked about in the last post. I laughed out loud when I heard it. You think life is hard, sister, when you’re living in an apartment that costs $1,800 a square foot, and you’re drinking wine out of Tiffany wine glasses? Whatever.)

That being said, a part of me wonders if the writers are trying to make Trump the VILLAIN. Okay, no. That doesn’t work. Trump as a VILLAIN is way too abstract for a fairy tale. A fairy tale VILLAIN wears your grandmother’s clothes. He stands outside your house. He’s the troll under the bridge you have to use to cross the river. She’s the woman who married your widowed father. He’s the wolf breathing down your neck as you run as fast as your legs will carry you, knowing in your heart you will never outrun him. Trump is many things, but he’s not a fairy tale VILLAIN.]

Heroes and Villains are like peanut butter and jelly. I don’t know why I chose this picture; I just thought he was handsome.   Photo by Omar López on Pexels.com

Now it doesn’t have to be real magic. But something inexplicable has to happen that somehow affects the course of destiny. On her walk to school, Red Riding Hood sees the city streets disappear into a thick old-growth forest for a moment before turning back again.

Or what about this—

It’s a freezing cold winter’s night. A pipe breaks during the worst Nor’easter New York City has ever seen. Somehow, the water from the pipe and the snow from the Nor’easter form a layer of ice thick enough to cover an entire building.

A single fireman approaches the building. Soaked in sleet, he hurls his ax at the ice. It bounces off and shatters. The fireman looks up into the sky, his face full of anguish. “Please,” he whispers and closes his eyes. “Please.”

Lightening lights up the sky, followed by a crack of thunder. The fireman opens his eyes and picks up his ax. The handle is broken, but the blade is good. He starts chipping at the door. At first nothing, but then the ice starts falling away. Soon he can see the door frame. He works harder. There’s the doorknob… the rest of the door. He takes the handle and pulls… it’s stuck… he groans and pulls harder… it opens.  He takes the stairs two at a time, kicks open a door, and runs to the bed, where a woman lies, deathly still.  He picks her up and runs down the stairs. An ambulance is already pulling up.

In the hospital, the woman opens her eyes. The fireman is there, sitting by her bed, still in uniform. “Where am I… John? John! John, you found me!” She reaches for the fireman, who wraps her in his arms. “How? How did you find me?” 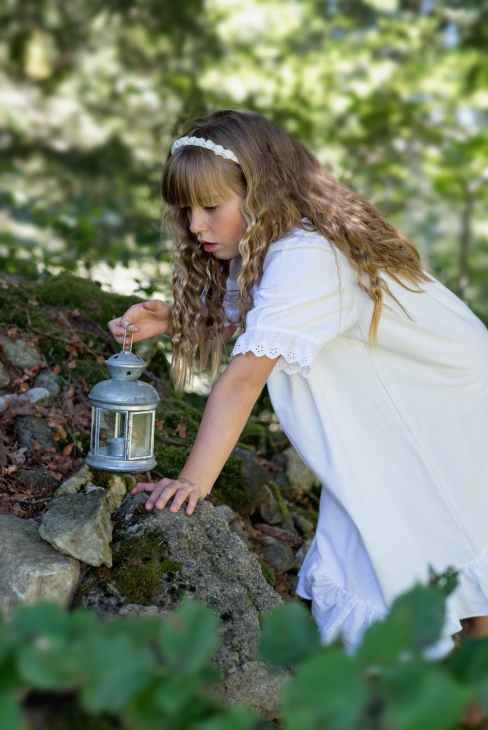 Magic is everywhere, if we look hard enough.  Photo by Pixabay on Pexels.com

For Hansel and Gretel, it would be finding their way out of the bloody treatment center and back to their family who love and miss them. For Red Riding Hood, it would be coming to terms with her new living environment and saving her grandmother from a vicious wolf/stalker. For the pigs, it would be fleeing from one weak hiding spot to another until they find a fortress.

I think the lessons are pretty clear. For Hansel and Gretel and Red Riding Hood, it’s the realization that home is better than being lost. For the pigs, it’s the importance of going the extra mile to stay secure, because if you’re lazy you’ll get eaten.

Listen, I’m all for switching things up. I love the idea of the pigs being criminals or Hansel and Gretel being street kids. My only quibble is with Red Riding Hood.

Yeah, this is subtle.

I mean, what is more  cliché than Red Riding Hood as a hypersexualized teenager?

Couldn’t she have been switched out for a Rapunzel character with agoraphobia and an abusive foster parent? Or how about a home-schooled and abused heiress who’s rescued by social services from her stepmother and sisters after her father dies? Maybe even swap out gender roles for a motherless boy Snow White living with a chess champion stepfather who tries to kill him when he realizes boy Snow White is a better chess player than he is.

The point is, it’s okay to be epic and subversive. Just make sure to also include the required elements that make a fairy tale a fairy tale.

BTW, now that celebs are punching down, I might get called out on this. Eh, what are you going to do? I call it like I see it.

Thank you to Pen and the Pad for the post Elements of a Fairy Tale by Tina Cisneros.

Tell Me A Story… or not.

Posted in General, Random Posts, Reviews, Things That Cross My Mind For No Reason

One Comment on “Tell Me A Story, Part 2… a Suggestion.”